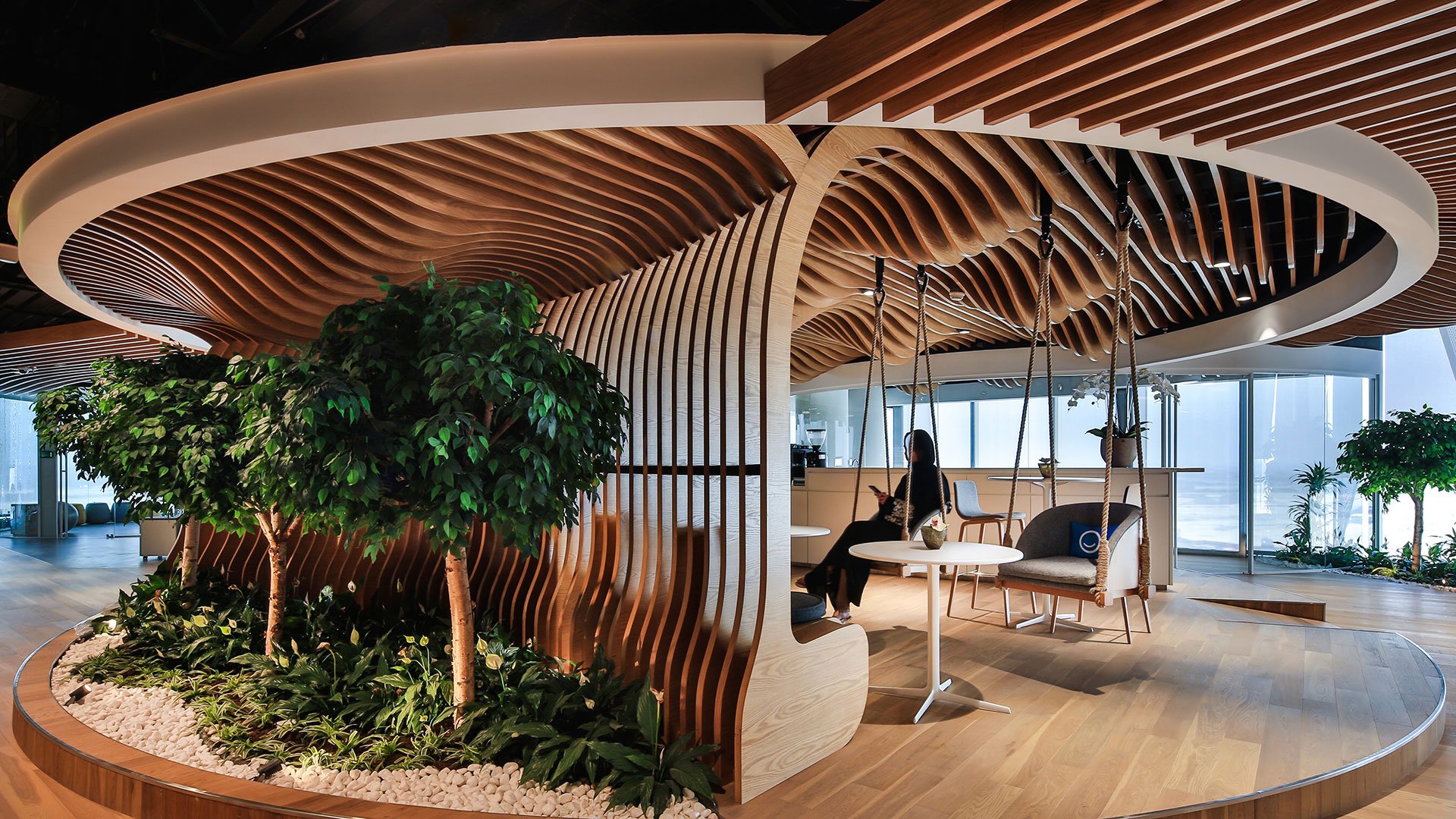 Your 3 need-to-know essentials to promote wellness at work

Frame’s former managing editor and current editor at large, Tracey Ingram is a freelance writer, editor and content director specialising in spatial design and products. We teamed up with Tracey to learn how, when and where we work in a post-pandemic world and to explore how to promote wellness at work through design. Read on to learn why holistic health, mix & mingle and going green are your 3 need-to-know essentials.

How, when and where we work: chances are those three adverbs produce very different answers today than they would have a decade ago. Thanks to new technologies and seamless connectivity, many of us can work at any time and from almost anywhere. But our mobile devices have both liberated and overwhelmed us, making work-life balance an increasingly elusive concept. While it may be largely up to individuals to monitor their own wellbeing – making time to take a pause, socialise with colleagues, grab a cup of tea or take a stroll outdoors – design can also play a big role in facilitating both physical and mental health. When considered holistically, the spaces we work from can help us connect to one another when we need and want to and to find balance through disconnection. They can immerse us in nature and foster fitness. They can adapt to us, rather than the other way around.

The workplace of the online generation began as what could now be called “desk graveyards”. Rooms filled with rows of monitor-topped furniture, their uniformity and incessancy recalling tombstones in a cemetery, were once viewed as the way to maximise space while seemingly maximising performance. But then the issues began to arise. First there was the question of ergonomics – as we now know, the standard desk-and-chair set-up isn’t conducive to a healthy posture. Furniture manufacturers responded with chairs that moved with you, and desks that toggled between standing height and seated.

Soon the whole idea of spending so many hours of the day sedentary came into question, and with companies eager to retain talent, several started supplying staff with a range of physical activities: on-site workout spaces, buildings you can cycle into straight from the street, and even entire offices designed around a grand central staircase to discourage elevator use. From there, the attitude towards physical health in the workplace began to include not only how people use their bodies but also what they put into them. Canteens became more conscious, serving up healthy organic meals using local ingredients.

More recently, the attitude towards health has become even more holistic, extending to incorporate mental wellbeing, too. The term “wellness” has now entered the modern vernacular – according to the Global Wellness Institute, the world wellness economy is now valued at $4.5 trillion, up from $3.7 trillion in 2015 – breaking societal taboos surrounding rest and relaxation. But rest and relaxation can mean very different things to different people. Where one person may crave a nap or meditation time, another might prefer to unwind with music or movement. Flexible rooms that cater for these varied activities – or inactivities – are now beginning to crop up in co-working and company offices alike. 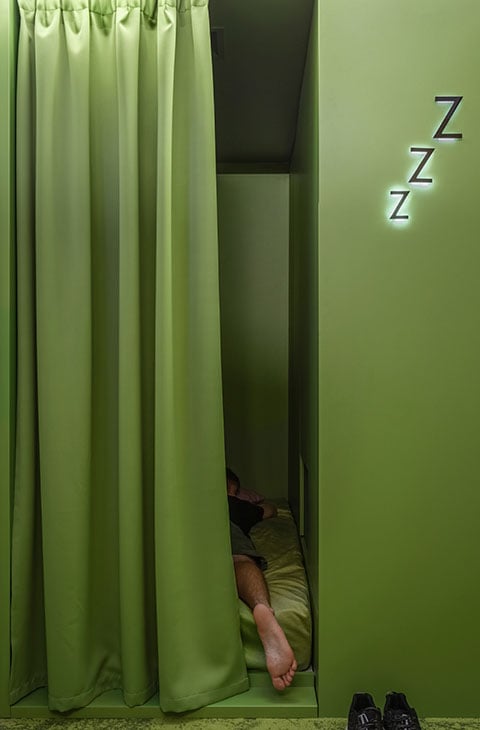 And it’s not just the definition of relaxation that’s open to interpretation: companies are coming to realise that spaces for productivity have numerous forms. The effectiveness of the open-plan office is now a topic of hot debate and an array of products are being employed to counteract its negative aspects: acoustic materials, for one, are tackling the issue of interior sound pollution. Softer materials in their myriad forms have the additional advantage of making workplaces feel more intimate and homelike, their calming effect a much-needed counterbalance to the profusion of hard interior surfaces.

Where one person may crave a nap or meditation time, another might prefer to unwind with music or movement

Whereas we once adjusted our lives and bodies around our work, we’re now moving in the opposite direction. And the consideration that everybody is different is leading to a more human approach to design, one that makes way for a flexible typology fit to serve the varied needs of today’s employees.

Technology has unshackled workers from the confines of a desktop, making it commonplace to work remotely at least part-time. Surveys by Gallup and LinkedIn found respectively that almost half of Americans work from home occasionally, while 82 per cent want to work from home at least one day a week. And the benefits for businesses and employees seemed to be mutual: workers got the flexibility they sought, perhaps saving some precious hours instead of commuting, while companies could downsize office space by implementing hot-desking.

A coin has two sides, though, and one of the consequences of remote working is linked to the so-called “loneliness epidemic”. While some reports claim that the issue has been blown out of proportion, others proclaim its seriousness. In the latter category, recent research from The Economist and the Kaiser Family Foundation reported that almost a quarter of adults in the UK and US often or always feel lonely. Many said their loneliness has had a negative impact on various aspects of their life. 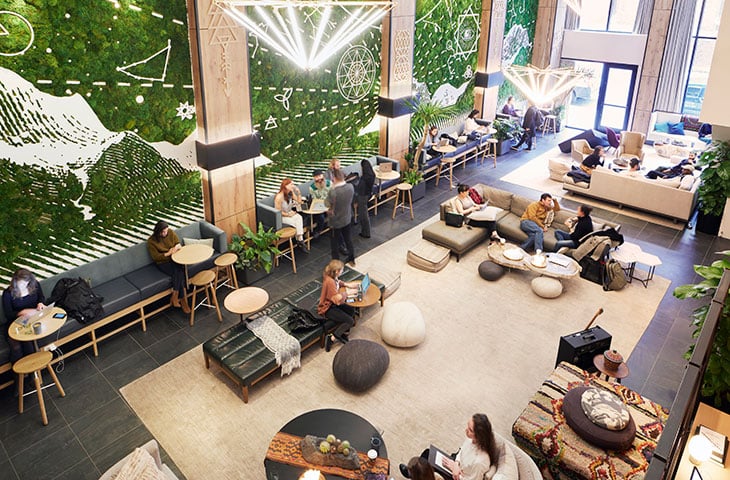 And even if we are working in the same building, the technology that has better connected us to the other side of the globe has created distance in other ways. We’re far more likely to flick an e-mail to a colleague across the other side of the room than to deliver the message in person, even though recent research published in the Journal of Experimental Social Psychology suggests that faceto-face requests are 34 times more likely to garner positive responses than e-mails. Plus, taking those extra few steps is simply healthier, too.

It’s no wonder we’re seeing a countermovement: social spaces in offices that encourage human connection. Think informal lounge-like breakout zones for socialising and collaborating, or open areas that feel more like a bustling town square or warm and welcoming hotel lobby than an office atrium. Hospitality plays a big role here, too. Just as every house party seems to end up in the kitchen, people naturally gravitate towards communal zones that serve up food and beverages. The artisanal coffee bar has become the modern-day water-cooler – and some companies are even opening up such offerings to the neighbourhoods beyond their doors to widen their social circle.

Workplaces can serve as a company’s beating heart, a hub in which users can unite faceto-face while also engaging with the wider community

The need for a sense of belonging has also spawned co-working spots that bring together those looking to fulfil specific needs, including wellness. At such establishments, task time can be interrupted with a yoga session, trip to the smoothie bar or enlightening lecture. In the end, it’s about creating places to which people want to go rather than have to go – especially as remote working will likely increase. Workplaces can serve as a company’s beating heart, a hub in which users can unite face-to-face while also engaging with the wider community.

Today’s population has been dubbed the “indoor generation” in a study by YouGov for the Velux Group. The research revealed that most people spend close to 90 per cent of their time indoors, where the air can be two to five times more polluted than it is outdoors. What’s more, over 50 per cent of the global population currently lives in urban areas, a figure that’s predicted to rise to 68 per cent over the next 30 years. As we immerse ourselves in city life, we consequently disconnect from nature. For these reasons and more, it’s easy to see why the demand for houseplants has skyrocketed in recent years (under #plantsofinstagram alone you’ll find over 5.5 million posts). And since we often spend more waking hours at work than at home, it’s no wonder the trend has infiltrated the office, too. 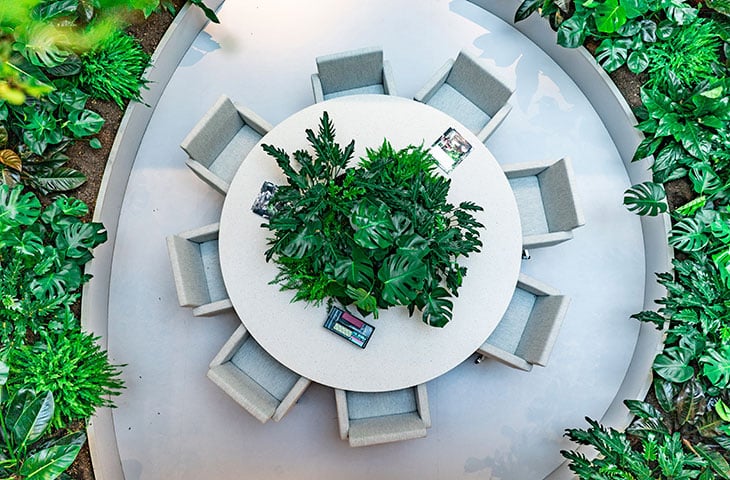 Visually, the trend aligns with a shift away from stark minimalism to something more organic and natural, but there’s a physiological drawcard as well: indoor plants are said to purify the air and to ease depression and anxiety. With evidence mounting that flora-filled offices lead to a reduction in sick days as well as overall increased productivity, architects and companies are calling upon green specialists to literally enliven their workspaces. The results range from jungle-like greenhouses to edible gardens, with some on-site canteens growing their own produce for consumption.

Greenery on a much bigger scale could help to fight the greater issue of climate change, too. In The Future We Choose, a new book by the architects of the Paris Agreement, the authors imagine a bestcase scenario in which “the air is moist and fresh, even in cities . . . The air is cleaner than it has been since before the Industrial Revolution. We have trees to thank for that. They are everywhere.”

With evidence mounting that flora-filled offices lead to a reduction in sick days as well as overall increased productivity, architects and companies are calling upon green specialists to literally enliven their workspaces

Protecting the natural environment is paramount, and forerunners in the field have shifted the conversation from “how can we be sustainable?” to “how sustainable can we be?” While much of the effort towards such sustainable feats is invisible, hidden within infrastructures and processes, design can underscore the intention. The renaissance of wood as a construction and interior material, for example, signals a shift away from big energy consumers such as concrete and steel – and has the added benefit of bringing a brush with nature to the built environment.

The best examples naturally combine the health of people and the planet. Just like many species of the plant world, we should have a symbiotic relationship with the environment: we should be as good to it as it is for us.

Revitalise your own office

Order your own free Tiles & Planks brochure now or explore the collection online and learn how to create comfortable spaces where people want to go rather than have to go. As floors and flooring become even more important in the architectural and interior design process, tiles and planks cement themselves as relevant, useful and inspirational materials, imparting significant impact on the office of today – and tomorrow.

Designed to promote wellness at work, tile and plank based flooring helps to meet the needs and aspirations of employees, with design options that bring emotions and senses into play while promoting flexible workspaces. Our expert team is always on-hand to assist you with specific questions regarding office design or any other query – we look forward to hearing from you! 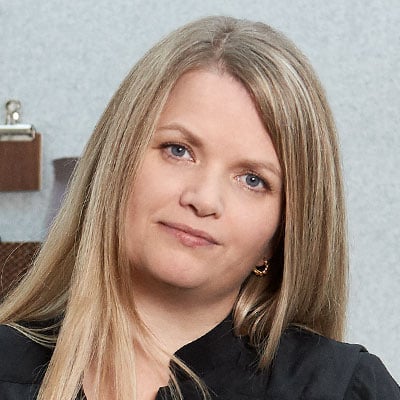 Texture: Your next trend to try